Morning Brew proves that email is key to owning your audience.

When Alex Lieberman and Austin Reif, co-founders of Morning Brew, launched their business newsletter at University of Michigan in 2014, they were simply trying to make consuming business news a little less boring for their fellow students.

“The basic ideas was pretty simple. The Wall Street Journal, New York Times, and The Economist, along with all these other legacy publishers, are extremely dry and dense business news publications that aren’t relatable to young people,” says Austin Reif, COO of Morning Brew. “Students are used to getting snippets of news, so our goal is to provide really high quality content in a way that people want to consume it: in a conversational, witty tone.”

The focus on relatable, quality content means that Morning Brew readers are more engaged than most, and the newsletter has become deeply integrated into the daily routine of business professionals across the United States. “Where a lot of other newsletters focus on subscribers, we really focus on engagements. We maintain a nearly 50% unique open rate which is extremely high,” says Reif. “I don’t think there are any business newsletters that give you the combination of humor and the wit, but also the information that you need.”

Their emphasis on quality content is part of a lofty goal: “We want to be the next-generation Wall Street Journal. We want to become synonymous with business news like the legacy publishers are with my parents’ generation.”

The simple strategy appears to have paid off for Alex and Austin—Forbes magazine reports that the Morning Brew newsletter has over 1 million subscribers as of February 2018 and boasts over $3 million dollars in revenue from over 40 active advertisers. 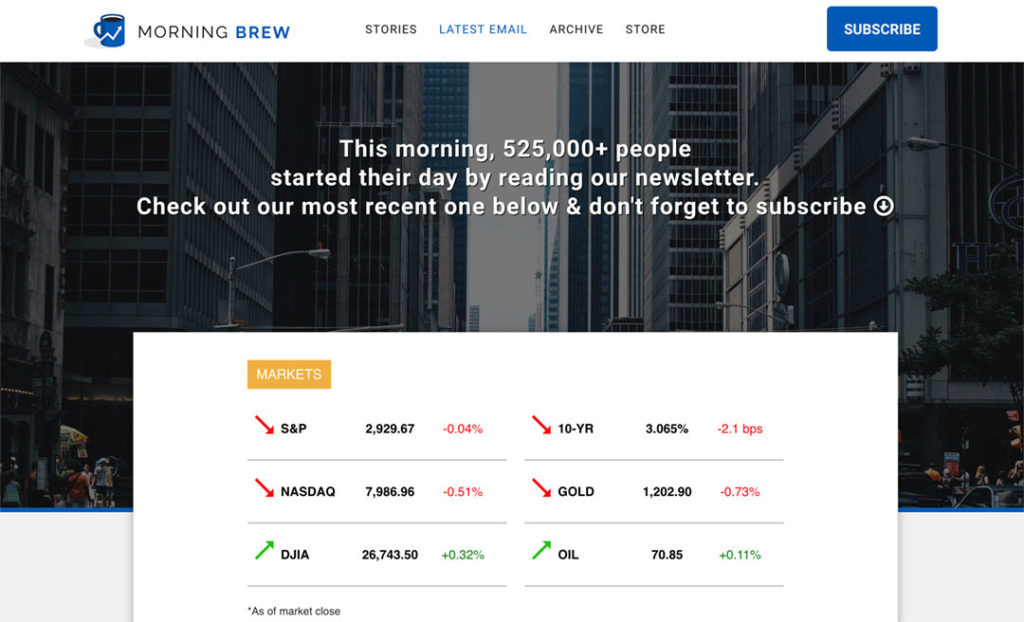 “Our goal is to leverage our audience and to get brand messages sold in a native and compelling way. We’ve worked with everyone from Chase to Microsoft, to big and small startups like Lisa, Mattress, and FunRise” says Reif, “If advertisers want to get their message in front of young business professionals, which is an extremely hard market to target, and an extremely attractive market, they can work with us.”

Skip the queue and empower your customers to share about you,
Find out how with The Better Sharing Workbook!

The Buzz On Campus

But before it became a business newsletter that reached the inboxes of more than a million business-minded professionals daily, Morning Brew had much more humble beginnings. 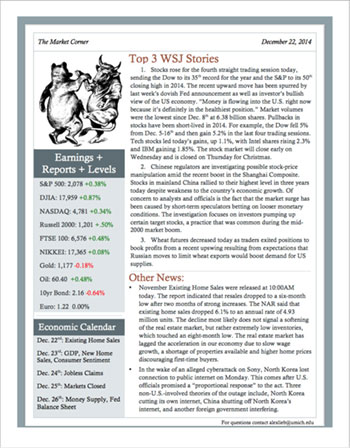 It was first launched as a PDF-based business news digest called The Market Corner by University of Michigan student Alex Lieberman. Lieberman, now CEO of Morning Brew, at the time was finishing up two classes and waiting to start a job at Morgan Stanley. With such a light schedule, he launched the newsletter to help his friends stay abreast of market news during their job search. The clever writing and quick-hit news digests were an immediate hit.

One of his earliest subscribers, fellow business student Austin Reif, joined the effort and soon after Morning Brew was born. “It started growing really rapidly at the University of Michigan and we probably had 200 students at Michigan before we had a few campus ambassadors at other schools,” says Reif.

Growth was largely driven by students telling one another about the newsletter, Austin says. “It was word of mouth, it was basically us just going to clubs and classes and telling people about Morning Brew.”

For the next two years the newsletter would continue to grow, but was not the primary focus of the co-founders. Austin was finishing school at University of Michigan, and Alex was working with Morgan Stanley as a trader in New York.

Buoyed by the success of Morning Brew, cofounder Alex Lieberman left his job at Morgan Stanley and Austin Reif turned down a job with a New York investment banking firm to pursue Morning Brew full time. “We decided to go full steam on this. We raised a small round of funding, a convertible note, and we hit the ground running to grow this company.” Since that day, Austin has spent his day to day learning at a high-level how to drive growth for Morning Brew and how to best monetize the newsletter.

After observing the power of word-of-mouth and referrals from the grassroots expansion at University of Michigan, Reif identified that a well-developed referral program was the key to driving subscription growth: “We introduced a referral program…and that’s been very successful.”

To encourage users to to refer their friends, Morning Brew placed a link in the bottom of every newsletter that allows each subscriber to share their own personalized URL with friends to sign up. This allowed them to win prizes such as access to exclusive content, t-shirts, coffee cups, and other great rewards.

The key to the success of this rewards program is two-fold say Austin, “One, give good incentives.” Delivering on that promise, Morning Brew rewards users with additional content, well-designed stickers, coffee cups, and tee-shirts, and exclusive groups to users who reach certain referral tiers. From time to time, readers can be motivated with entries to win sweepstakes prizes such as a Macbook Pro for them and their referral. 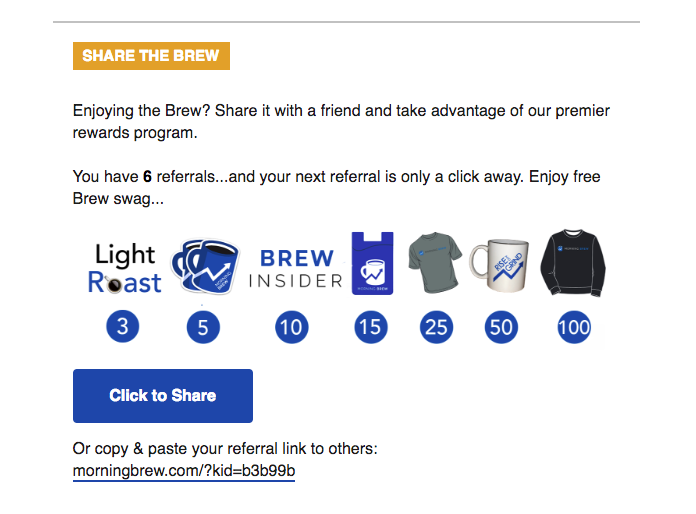 The second part of the rewards equation is simple, says Reif. “Make it as easy as humanly possible to share the newsletter.” To do that, the Morning Brew team built a centralized location where users can invite people they know via through every available web communication channel: email, social channels, text message, and mobile chat applications.

Email has been by far the most popular, and by optimizing the referral process, Morning Brew has doubled the number of individuals who receive an invitation to the newsletter.

In addition to their rewards program, Morning Brew has also leaned heavily on paid acquisition channels such as social media advertising for their continued growth: “We’ve really ramped up paid acquisition and increased our budget every month. The big push has been on social.”

Reif points out that the referral program creates a viral loop that plays a major role in driving cost efficiencies for paid acquisition channels as well. Reif describes that creating a multiplier at any point in the referral flow has massive benefits for increasing the elusive “k-factor” that helps businesses grow exponentially: “It’s getting that viral loop going…To get people to refer you need two things: to give people an incentive and make it extremely accessible.”

We’ve been hearing email has been dying since we started [Morning Brew]. Since 2005 people have been saying this, but there’s actually been a resurgence.”
Austin Reif, COO Morning Brew

The Future of Email

One of the obvious questions posed to Alex and Austin on a regular basis in view of the explosion of alternatives for audience development is “Why email?” And the question is fair. With distribution channels like Facebook and WhatsApp, alongside content mediums like podcasts and video, why is email both Morning Brew’s primary distribution channel and primary growth channel?

“I love this question, because we’ve been hearing email has been dying since we started [Morning Brew]. Since 2005 people have been saying this, but there’s actually been a resurgence. And the reason why there’s a resurgence is there so much content out there. 3 to 4 years ago, it was super sexy to not have your own O&O, your own owned and operated platform, because anything you put on Facebook, Facebook would just show it to millions of people,” Reif describes.

Reif notes though that when you don’t own your audience, things can be problematic when a platform decides to make an algorithm change or limit access to your hard-earned audience: “Look at Buzzfeed, NowThis, or anyone else. These platforms, since Facebook has cut the cord, it’s hard to get organic reach. Advertisers are starting to see that they are getting millions of impressions, but was there actually quality there? I would argue the answer is no.”

Email, Reif tell us, is different. “It’s habitual, you get it every day from the same people at the same time. I don’t see email going away any time soon. In fact, I think it’s a great place to be because it’s a an intimate one to one experience.”

Reif points to big companies like Condé Nast that are leveraging email to drive revenues despite the host of alternatives available to them: “I believe the New Yorker said the #1 indication that someone will become a paid member of the New Yorker is the correlation between their subscription to their email newsletter.”

Reif’s hunch about the power of email is backed by several data points. A recent Forbes article highlighted the fact that “Condé Nast’s data science team built a model to predict which factors best determine whether a NewYorker.com reader will become a subscriber. Whether someone was a newsletter subscriber was the No. 1 indicator…The New York Times has noted similar behavior among its own readership.

“It’s not like Facebook,” says Reif. ”We have five minutes of your morning every morning. For people to roll out of bed, open their email, and open Morning Brew, it’s a really high quality interaction. You are part of their habit as an advertiser and have become integrated in a young business professional’s morning routine which is why we’ve had so much success with our business partners.”

Reif sums up our conversation with a confidence that bodes well for Morning Brew’s continued growth: “That’s the future of email, and I think it’s a very valuable platform.” 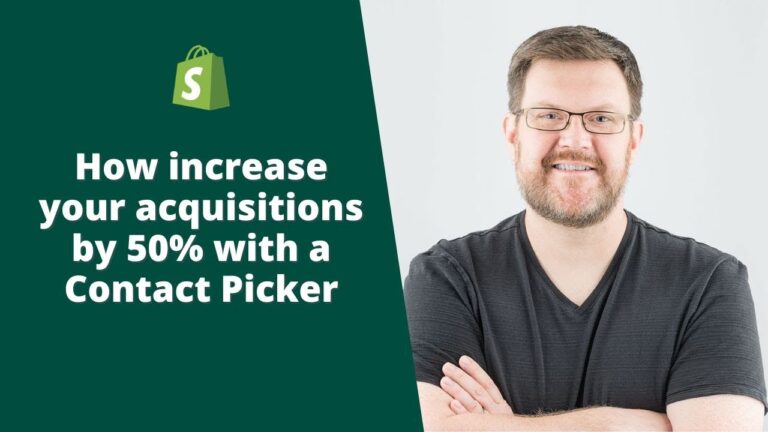 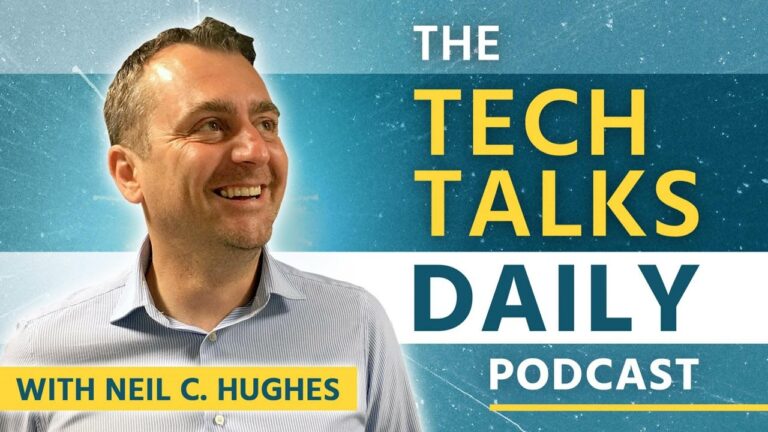 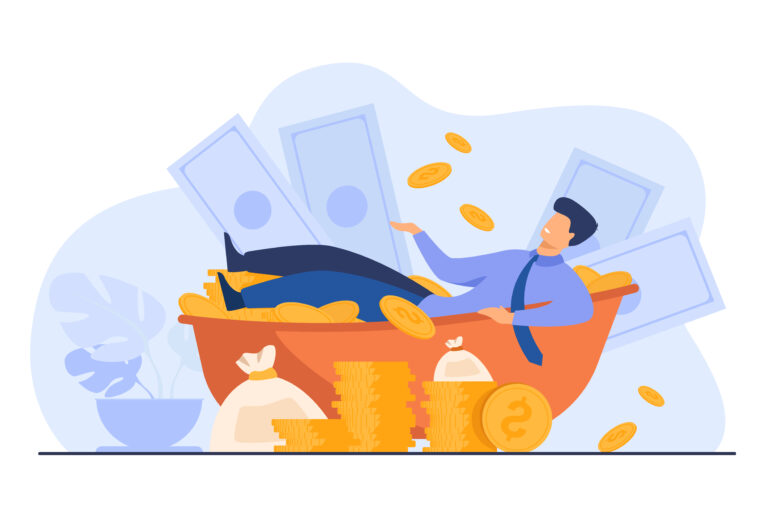