Greenvelope was spending countless support hours helping customers through the “last-mile” of their high-quality email invitation process, aiding them in manually importing their guest lists with email addresses. CEO Sam Franklin tasked his CTO, Kyle Leesman, with finding a solution that would reduce the amount of time dedicated to solving the problem, improve user experience, and enable Greenvelope to grow more quickly.

Greenvelope is an electronic invitation service that emulates the formal experience of opening “traditional” printed invitation to allow users to send invitations to weddings, events, and parties and save time, trees, and money.

In keeping with its effort to help the environment, Greenvelope has helped reduce 180,000 pounds of paper waste and keeps 960 additional pounds of CO2 from entering the earth’s atmosphere since being founded in 2008. In addition, they enable more than 3,500 businesses and thousands of users send millions of emails to their upcoming events. 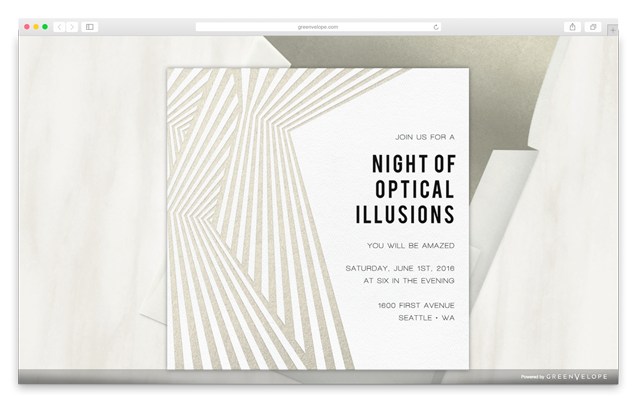 Greenvelope was started to provide users with a premium e-invitation experience uncluttered by advertising, high-quality design, and professional quality.

CloudSponge has become a key part of the most critical process for Greenvelope once the invitation has been designed – sending the invitation to potential guests. CloudSponge enables seamless contact importing from Gmail, Yahoo, and other contact sources where their information is stored. 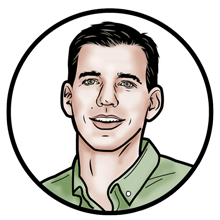 CloudSponge has definitely eased the import process for any number of our users to be able to point and click and authenticate with their webmail system and be able to pull a large percentage if not their entire guest list straight over into Greenvelope. That is the heart and soul of where we are dealing with the users’ guest lists and the contacts that they want to be in touch with.

As Greenvelope grew its user base and passed the 1,000,000 invitation mark, the time and man-hours needed to support users began to increase to an onerous degree. One the major sticking points arose from users manually entering or importing their contacts from both offline and online lists. Errors from failed imports or lack of clarity around the import process had many users turning to Greenvelope staff for answers.

Sam Franklin, CEO and founder of Greenvelope, tasked CTO Kyle Leesman with finding a solution that would help the company solve the import issue and maintain a user experience that was on par with the expectations of the rest of the web app. Contact importing from webmail and cloud-based address book accounts seemed like an obvious answer, so began research a solution:

“It was definitely client demand and us intuitively knowing that all these people that they are trying to send emails are in their existing list of contacts in their Gmail account or in their Yahoo account. We wondered if there was a way to get those addresses without having to create csv files and excel files and uploading manually.”

With many years of development experience under his belt, Leesman knew that he wasn’t the first person to need such a solution and hoped to find a team that had built a framework for addressing the issue. “I had the mindset that you can build it or you can buy it. If somebody else has already done this there’s no reason to write it yourself and spend those resources. I did some initial research on what it would look like to import your contact list from Gmail and thankfully ran into CloudSponge from a search engine query.”

Kyle and his team quickly signed up for CloudSponge and began the integration process. Much to his surprise, the process was easier than he expected. Moreover, he found that he not only was able to get address book information from the major address book providers such as Gmail, Outlook, iCloud, and Yahoo, but the CloudSponge integration allowed him to integrate with “long-tail” contact sources where guest information might be stored for his users. 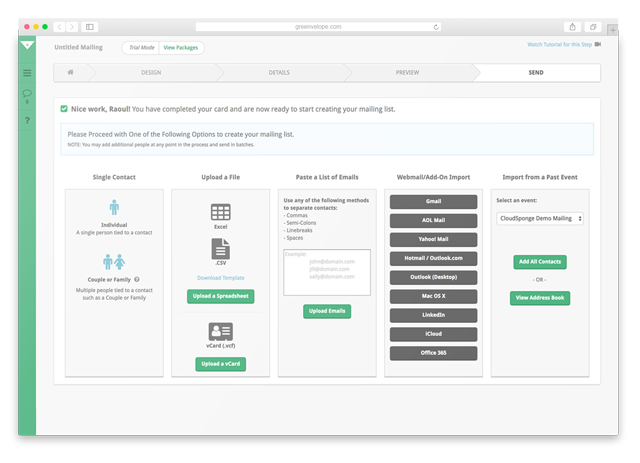 When Greenvelope turned to CloudSponge to solve an address book import problem, the unexpected result was immediate integration with mutliple contact sources like Gmail, AOL, Yahoo, and more.

“It was a pretty straightforward process to sign up, integrate it into our code, and be ready to pull contacts not just from Gmail and Yahoo but from a whole handful of providers with the same amount of effort and same amount of code written on our part,” says Leesman.

The impact the business was almost immediate. Shortly after the implementation, users were having a much smoother experience creating guest lists and sending invitations. “We saw a decrease in the number of hours of support dedicated to helping people get guests imported into Greenvelope.”

In the early days, being able to reduce the manpower of our support team was key. Every import that came from CloudSponge was one that potentially might have needed our help and assistance through a more manual process.

This offered more benefit to Greenvelope than simply reducing the amount of time dedicated to support requests for contact importing. The saved development time was critical to preserving the scarce resources of the startup and allowing them to focus more on development.

“In the early days, being able to reduce the manpower of our support team was key,” says Leesman. “Every import that came from CloudSponge was one that potentially might have needed our help and assistance through a more manual process.”

The saved effort allowed Greenvelope to focus limited development resources on additional features and UX improvements that gave them a competitive edge in the market. This allows Greenvelope to respond to customer requests about added features that help them be leaders in the market:

“There’s a couple of things that we do that have been largely innovative have been requests from customers like survey questions…such as selecting meal choice with their invitation. We’ve branched out into the ability to sell tickets or other items or to collect monetary donations as part of the invitation process.”

By default, CloudSponge is a key component of a viral loop that encourages added growth with each email sent:

“We track our leads and sources and we get a significant amount of new accounts are people whose first touch is receiving a card from us. The business model in and of itself is a slow, viral expansion of the Greenvelope universe and every invitation that someone sends to 100 family members is that many more people who have now seen us and think ‘That’s really neat I could use this for X, Y and Z’,” says Kyle.

By making the user experience easier at the sending stage, more customers will complete the e-card process, promoting growth and new user acquisition. Currently, Greenvelope is growing at a rate of about 40-50% per year. 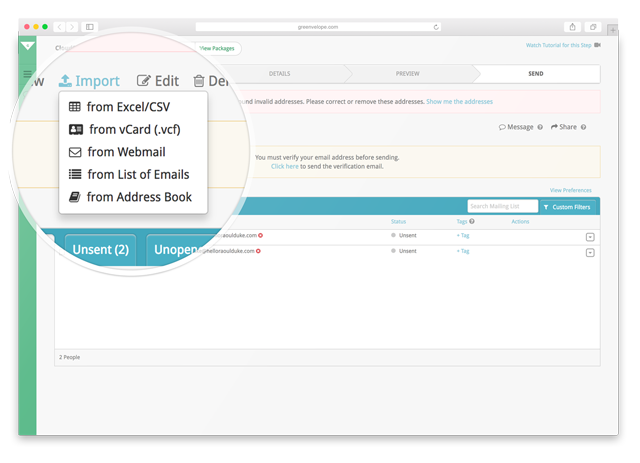 One of the key benefits of a better user experience means more emails sent. For Greenvelope, more emails sent contributes to a viral loop where every recipient is a potential future customer. Greenvelope makes it easy to import contacts using as many methods as possible, including CloudSponge to add support for all major webmail services.

In addition, leveraging CloudSponge has enabled Greenvelope to focus on growth activities beyond North America, further promoting international expansion. Greenvelope has leveraged CloudSponge’s language translation capabilities so that users in 6 non-English markets are able to utilize their contact importing toolset and send formal invitation to their peers. 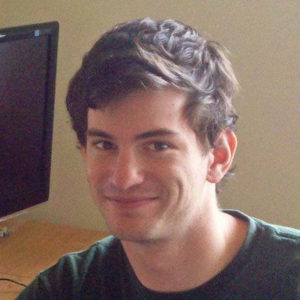 We recently launched Greenvelope in 6 non-English languages (German, French, Spanish, Italian, Dutch, Portuguese). We were able to add translations for CloudSponge through the API to make importing contacts easier for our international customers

A Gift That Keeps Giving

Greenvelope continues to see benefits from using CloudSponge, years after the original implementation. Kyle reflects on the value of CloudSponge not just as an up-front investment but as a tool that continues to produce time-savings for Greenvelope.

“In the world of software, there’s always the build or buy decision. With contact importing in particular, it’s not just build and build once, but it’s build once for Gmail, build once from Yahoo, once for AOL…and as you expand internationally that list of providers only grows…The amount of effort that would have been required to have our developers doing that manually would have been substantial up front and then even more as those APIs and integrations had to be updated.”

And he’s quick to point out that in the world of third-party integrations, things can and do go wrong. Several times in recent years, LinkedIn has either ceased providing certain types of data or significantly revised how and what the API makes available:

“We’ve been in touch a time or two when the LinkedIn connection wasn’t working and when we did reach out you were already resolving the issue. Knowing that CloudSponge was ready and quick to react to third-party changes beyond your control is just another reason to use the tool.”

The Move To Mobile

The Greenvelope team also saw benefits from using CloudSponge as the technology that drives the web continues to evolve. Mobile usage has skyrocketed in the last few years, and web-based companies like Greenvelope must respond to the adapting technologies and form-factors that drive the user experience.

“Over the last few months, we had undertaken a process to create a more mobile friendly version of the website that we are now serving to users who access Greenvelope via phone or tablet.”

Leesman’s team was worried that reconfiguring the CloudSponge widget for mobile would be a huge pain-point, or worse, require switching to a new technology altogether:

“We started to look into it and realized that there is an entirely new widget that was released…that was built to be mobile first. Not only did it solve the [existing] issues, but it was a newer, cleaner looking layout and was geared to run on a desktop and mobile environment.” 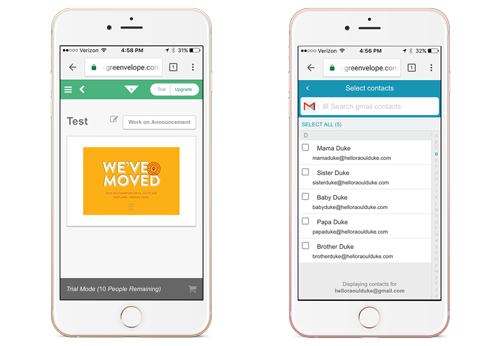 Leesman reached out to the CloudSponge support team and was quickly guided through the necessary steps to make the switch to a mobile-friendly form of the widget. “It was built nicely, and we had to make zero code changes on our end to switch that out, so it turned out to be a no-brainer to make that switch.”

💥Editor’s Note: If you need some inspiration for your invitation UI, then check out our in-depth teardown of Greenvelope’s recipient list creation interface.

Greenvelope is an electronic invitation service that emulates the formal experience of opening “traditional” printed invitation to allow users to send invitations to weddings, events, and parties and save time, trees, and money.