What began as a useful import tool became a centerpiece of their user onboarding experience.

When CEO Cameron Nordholm tasked his team with finding a utility that improved how users imported contacts into the Gainfully app, he also uncovered a tool that would dramatically improve how quickly users realized value from the platform.

Gainfully is a financial network website that helps financial advisors use social media to share online content with clients and grow portfolios without violating federal guidelines and regulations. In addition, companies that employ financial advisors can easily supervise and approve what content is available for their financial professionals to share.

Since launching in 2015, Gainfully has served thousands of financial professionals, published over 30,000 compliant social media posts, and enabled dozens of large broker-dealers to supervise registered representatives.

As Gainfully grew and expanded the content-sharing platform, it quickly became clear that the custom built solution for importing a financial advisor’s contacts from different sources like Gmail, CRMs, and local databases was causing painful UI issues and acting as a major blocker for new users and customer support headaches.

“Getting that data in so that they can experience the value of Gainfully’s features is prerequisite for anything else on the platform,” says Nordholm. “We originally put a CSV upload and parsing utility into our contacts feature for our users, but we ran into all the issue of users supplying bad formats and continually running into errors that really left a sour impression of the product.”

Instead of forcing users to export contacts from other sources and importing them into Gainfully, the development team began to explore a better way. Nordholm tasked his team with building a solution that allowed users to access existing webmail contact libraries directly and leverage the power of different webmail address books.

“We had tried to develop something ourselves, and just like any company does, we went out on GitHub to see what CSV parsing libraries were out there, what Webmail OAuth libraries were out there,” says Nordholm. The team quickly realized that building and maintaining an in-house solution that was able to access several different webmail and contact sources was going to be a formidable task in the short and long run. “The requirements list added up very very quickly to the point where we had a multi-week estimate on the contact import project.”

“So that led us to two conclusions,” continues Nordholm. “If at all possible, let’s see if we can delegate that contact import feature to a dedicated tool because my developers have better things to do to add differentiation to our products.” Basically, the Gainfully CEO hoped to find a pre-built, maintained solution so that his development team could focus on core product updates that helped them stand out.

“Contact import is something that a lot of products need,” Nordholm explains, “but it doesn’t really add differentiation. It adds value, but not differentiation, and if you really want to be great you have to focus on being different than the competition.”

That’s when the Gainfully team discovered CloudSponge. “CloudSponge offered us a way to help us access our users contacts from a very broad set of different sources for contacts and do that very quickly and cleanly.“

With CloudSponge, Nordholm and the team realized they could add contact importing for nearly every webmail and address book library with a single implementation. “From a development perspective it was amazing to get all the different data sources integrated into the product with just one actual development integration for our team.“ 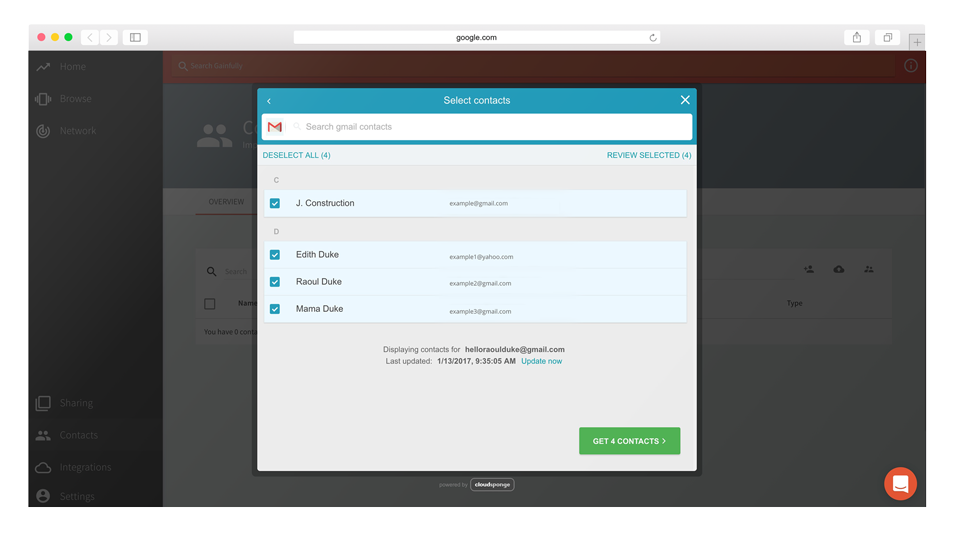 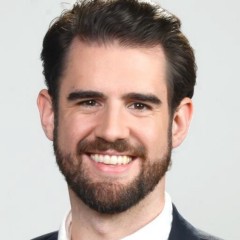 From a development perspective it was amazing to get all the different data sources integrated into the product with just one actual development integration for our team.

The Gainfully team didn’t have to wait long to see the benefits of integrating with CloudSponge for contact importing into the platform. Along with improvements in the number of imports initiated, the number of contacts imported, and better user experience for financial advisors, the Gainfully team also saw a reduction in man-hours required assisting financial advisors with imports into the platform.

“From a qualitative perspective, the the results have been really good. We’ve gone from fielding 10+ support inquiries a day to maybe 1.” In addition, CloudSponge shaved weeks of development from the project with many more hours of maintenance and troubleshooting in years to come.

User Onboard: Hit The Ground Running

Soon after, Gainfully began examining ways to improve the user onboard process in order to offer more up-front value and improve adoption rates for new users. “Our user onboarding process has been one of the parts of the product that we’ve done the most revisions on. This is because the first touches that users have with the product are the most important. We were looking to pack a lot of value into that process and educate the users along the way.”

Gainfully recognized that the user onboard experience could greatly benefit from integrating address book and contact importing with CloudSponge. “Our users were having such success with [CloudSponge] that we wanted to integrate it into the signup process, says Nordholm. “By including CloudSponge in the signup process, we end up with a very complete feature and user experience once the user lands on the product. They have all their contacts, they have their various profile elements filled out, and they can really start using the product immediately rather than thinking about a tedious data import that might turn out to be a blocker as was the case when we originally added that feature.” 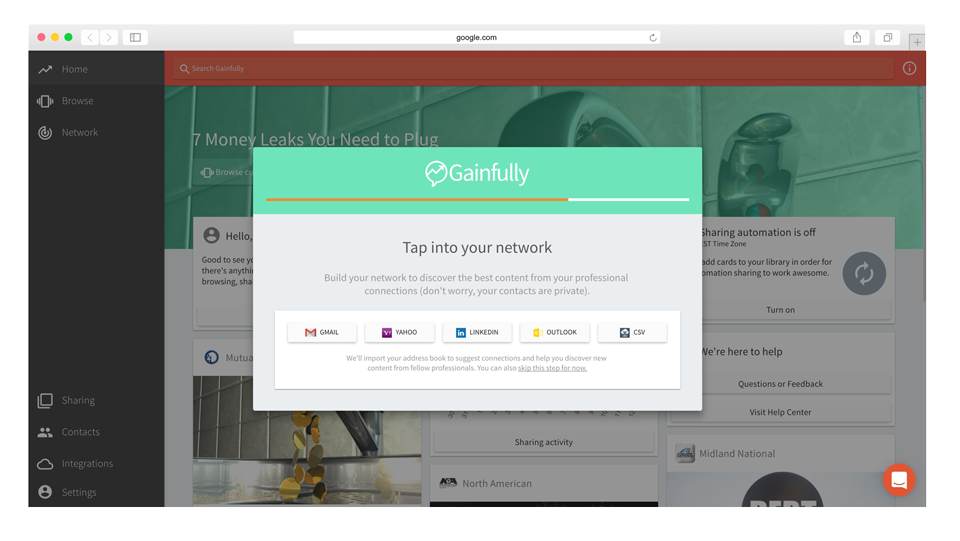 By including CloudSponge in the signup process, we end up with a very complete feature and user experience once the user lands on the product. They have all their contacts, they have their various profile elements filled out, and they can really start using the product immediately rather than thinking about a tedious data import.

The CloudSponge integration had a clear impact on core metrics for user success on the Gainfully platform. “We’ve had users create over 70,000 relationships on Gainfully and a majority of those have been driven by the improvement that CloudSponge brings to the product. And those are high-value end-user relationships,” Nordholm described.

As Gainfully evolves, these deep, high value connections drive success for the financial advisors who use their platform. “We’re a professional network, so after LinkedIn deprecated their connections API, it’s become really important to help uncover value added relationships. It’s very important to build the best possible data set to give our users a good experience.”

As Gainfully looks forward, they also appreciate the amount of time that a tool like CloudSponge allows them to redirect to more high priority projects. Gainfully was not only able to roll out the improved UI faster than originally anticipated, but also saved hours of development time in future updates and maintenance as webmail service APIs evolve. “As all of these different APIs and import methods updates for these different service providers, we don’t have to touch it at all which is awesome,” Nordholm describes.

Help users easily import contacts into the Gainfully content platform from various sources such as Gmail, LinkedIn, and CRMs and get more value out of the product as quickly as possible.