Discover how to increase the click-through rate of any social shares and emails users send from your fundraising platform.

For a fundraising initiative to go viral, you just need to get as many people to tell others about it – on social media and via email.

Those shares, in turn, should generate more traffic to a project’s page, and drastically increase chances of reaching the funding goal.

But note that I said, should.

That’s because social media shares or emails do not automatically result in clicks and visits.

To generate those, you need to optimize your social sharing and email sending processes for engagement.

In this post, I’ll show you exactly how to do that. You’ll learn how to set up your default email and social messages so that they would compel others to act.

A side note: If you’re only starting to research the idea of making your crowdfunding project go viral, check out our earlier posts on the topic:

Let’s not beat around the bush here. When it comes to achieving virality, the numbers truly are against you.

And I’m sure you’ll agree, that’s a lot of noise for your viral messages to compete with.

Also, potential donors are becoming familiar with the marketing tricks brands use to manipulate them.

Now, this doesn’t necessarily stop them from donating. However, it would affect their choice of an initiative to back.

(Note, we talked more about the reasons people choose to support a crowdfunding or fundraising project in this post.)

In 2016, a research conducted by the British government discovered that trust in charities has dropped to all-time low, at 57%.

Although the data relates mainly towards how we consider our money is being used, rather than the validity of various marketing messages fundraising companies use, the fact remains:

Donors have become extremely choosy as to which initiatives to support.

In the context of virality, this means that they won’t simply act on an initiative or project just because someone shared it with them.

Luckily, overcoming this isn’t that difficult. However, it requires you to do one thing first:

Stop relying on a user to write an engaging message. Instead of leaving it up to them to convince others to check out a project, give them a ready-made copy they could use.

Tips for Optimizing the Email Process and Copy

The benefits of using email for making fundraising projects go viral are irrefutable.

First, email is personal. Unlike social media messages, this channel connects you directly with the recipient, even if it’s a complete stranger.

It remains the main communication channel too. Various research projects predict that email usage is only going to go up in the coming years.

Finally, it’s an open network. As Jay, CloudSponge’s CEO pointed out in an earlier post:

“Email is one of the few open networks. Other platforms like Slack, Facebook Messenger, Skype, etc. are closed. You can’t send a message into it, unless you are a part of a group. You also can’t send a message out of them. Email, however, allows you to communicate without a need for a preexisting relationship with the recipient.”

Not to mention that it works. Just consider the feedback we got from DonorsChoose.org.

After improving the email sending process, the company saw a 65% increase in emails sent. As a result, as Tea Ho, the company’s product designer revealed, more projects get funded.

Let’s look at them in turn.

The challenge with emailing about fundraising projects is that those emails rarely go to a single person. Users send them to at least their family or friends, making the number of recipients significant.

The problem? Having to copy those emails from their address books might prove to arduous to undertake.

Allowing users to import emails from their address book directly into the email was the first cornerstone of DonorsChoose.org’s success. 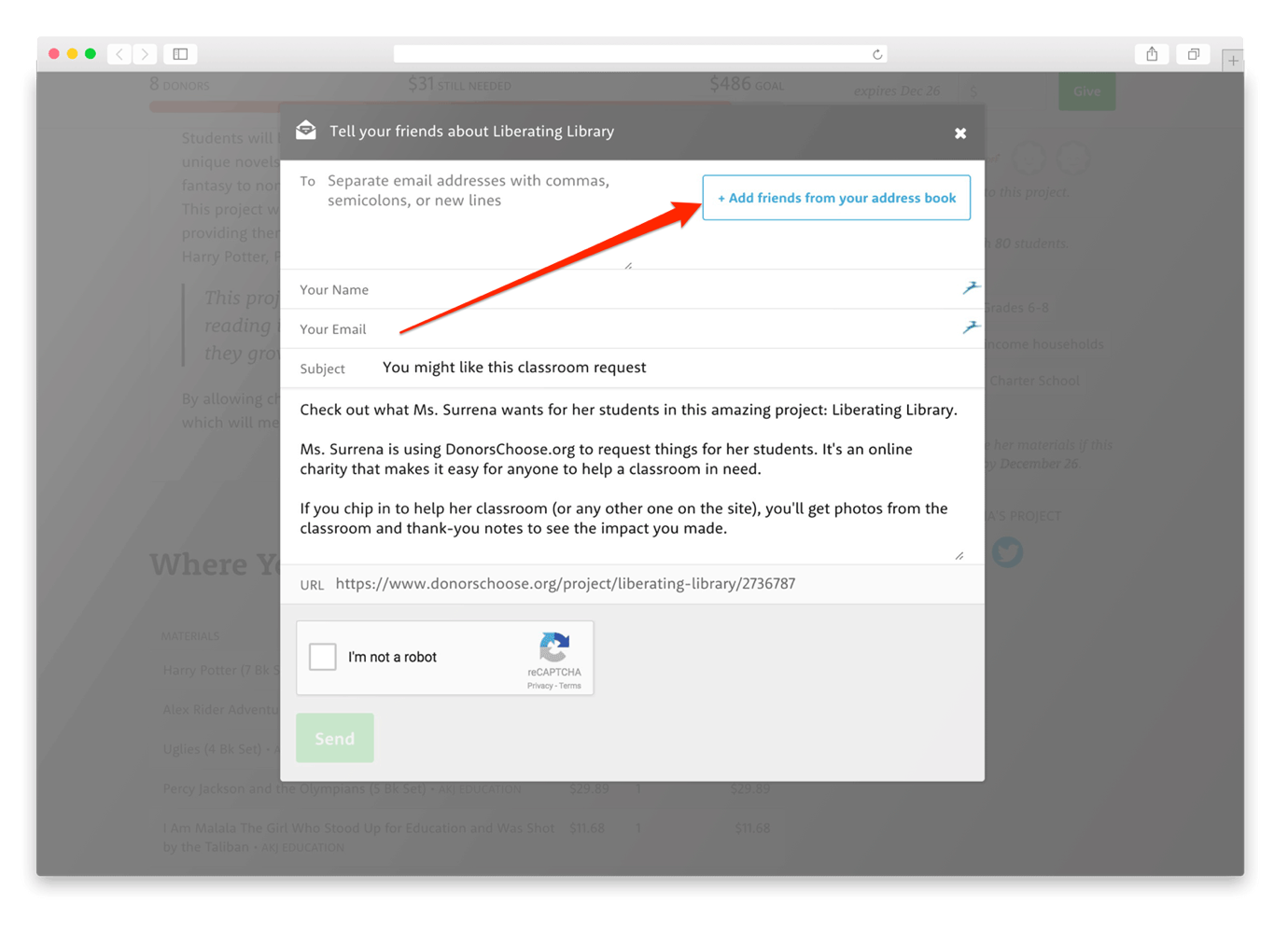 With solutions like CloudSponge, users can tap into their address books and import emails of every person they’d like to tell about a project in a matter of seconds.

Note the word emotions above. It’s the key to unlocking those clicks and visits.

”[…] everything we send to recipients will generate an automatic emotional response; be it positive or negative, large or small. The reason for this is because of the way our brains are wired.”

Further in the article, he reveals the secret to writing emails that generate response:

“The trick therefore is generating enough of an emotional response in the limited time that you’ve got to grab recipient’s attention.”

For you, this simply means that emails users sent out to their network must connect with the recipient’s emotions. Otherwise, those messages will simply flop.

This starts with the headline, the very first copy of your email a person sees. It’s also the most important element that affects a person’s decision to even open the message.

DonorsChoose.org, for example, uses an informal headline that triggers curiosity to entice an open:

Kickstarter, on the other hand, leaves the field empty, relying on a person to write something that will engage their recipients. Which means that the success of the referral is beyond their control.

Curiosity isn’t the only way to make a headline compelling to open. Others include:

Next is the email body, the actual copy that aims to introduce a person to the project and convince them to check it out.

Again, many fundraising platforms keep this section basic, including only the project’s name and URL.

Razoo makes a direct request, pleading someone to help fund a project. However, they provide a little explanation why, apart from a weak emotional driver – “it would mean a lot to me.” 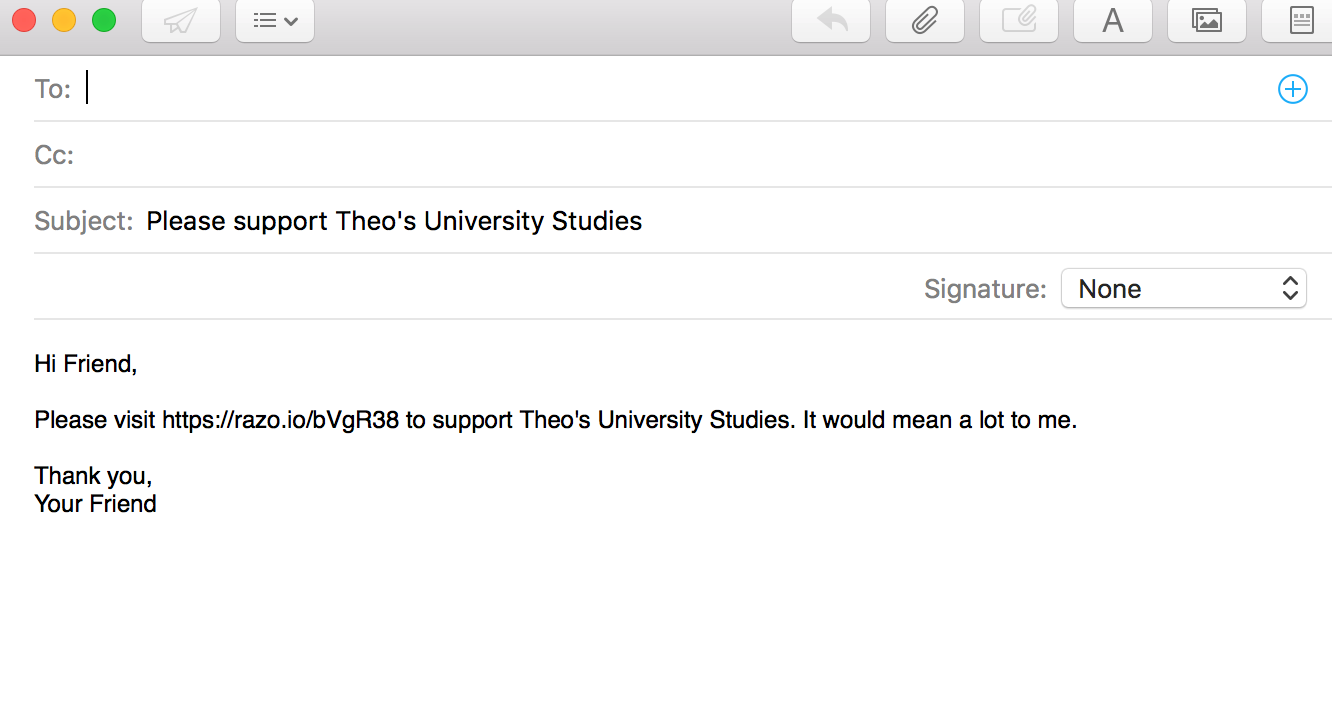 DonorsChoose.org, however, uses the copy to its full potential. It describes the project, provides background information on the site, and makes a strong promise of emotional reward for support. Take a look:

Look, the biggest challenge with social media messages isn’t what to say.

It’s how to say it with so few words.

After all, if you want your tweets or Facebook messages to have any impact, they need to be short. Really short.

Unlike email, a social media post comprises of nothing but the headline.

Luckily, there are two elements you could use to increase their click-through rate:

(Note, I deliberately omit another crucial factor – timing. And the reason for that is simple, you have absolutely no control over when someone shares your project.)

Let’s go through them in turn too.

According to Buffer, the most powerful social media updates focus on evoking curiosity or stating a benefit of clicking on a link.

Here’s an example of tweet that focuses on curiosity:

Note that the message doesn’t include a project’s name or other details but focuses on engagement.

Here’s another example, this time combining both, engagement and the project:

However, here’s an example of a tweet that misses the opportunity to engage the audience:

But what to include in the message, specifically?

I’m going to turn to Buffer again, whose research revealed that the most clicked messages included the following phrases – “via,” “Please” and “Check.”

Placement of the link

Normally, we place links at the end of the social message.

But as this research by Dan Zarrella revealed, social messages, particularly tweets, with links about 25% into the copy achieve much higher click-through rate than those with URLs at the end. 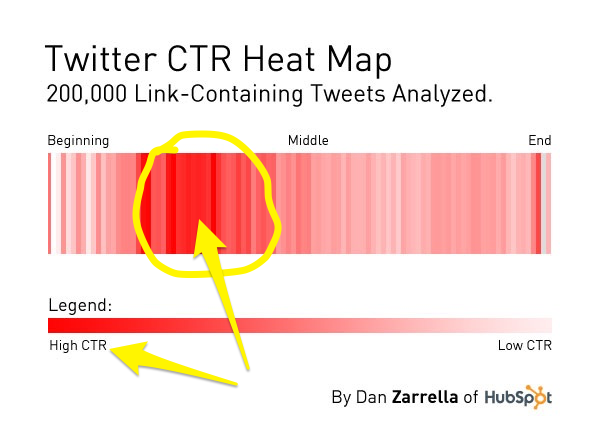 All of the crowdfunding sites I’ve researched, however, place the link at the end of the tweet.

Here are some ideas how they could use to improve their messages:

They also get 150% more retweets, further increasing their reach. 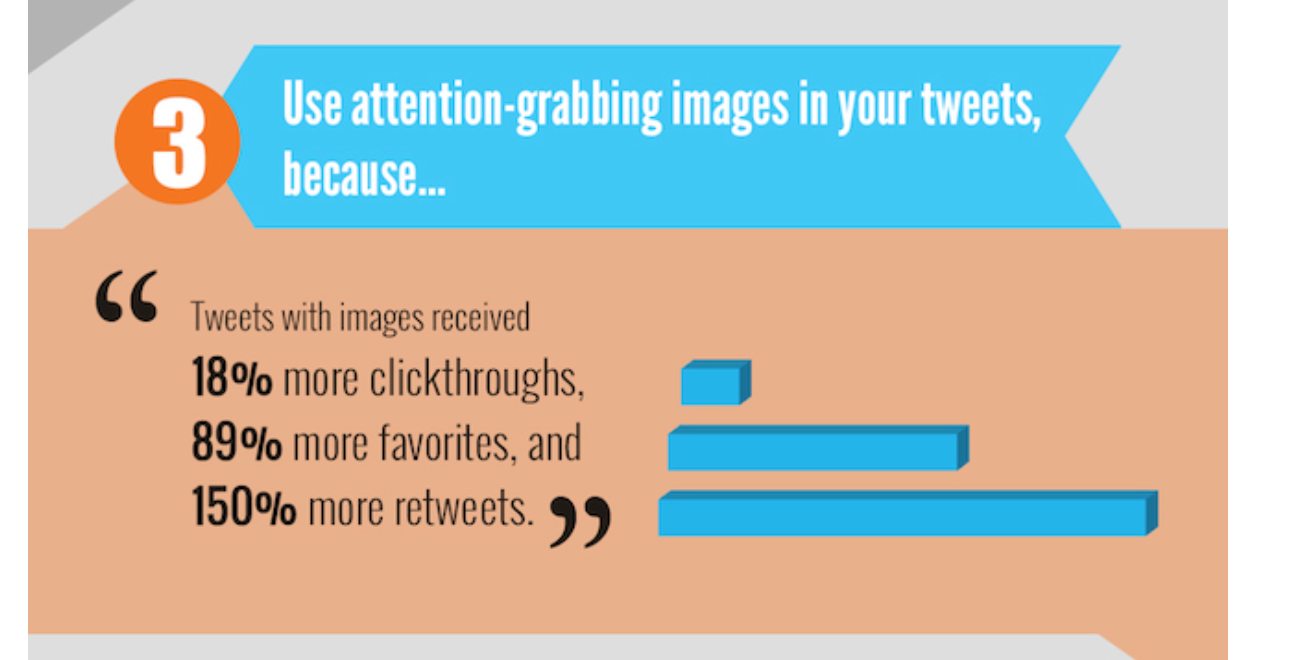 (Which pretty much makes sense. For one, visuals make those updates more visible, right?)

However, in my research for this article, I didn’t find a crowdfunding site that would include a project’s picture in a tweet.

(Note, that doesn’t mean nobody does it. It just means I didn’t find them.)

But how different those updates would be if they included a visual representing the project?

Striking, if you ask me.

And considering the data above, they’d probably have a much better impact on the project’s virality.

For a fundraising initiative to go viral, you need to:

Hopefully, after reading this post, you know exactly how to do it.

How to Boost Your Customer Referral Program 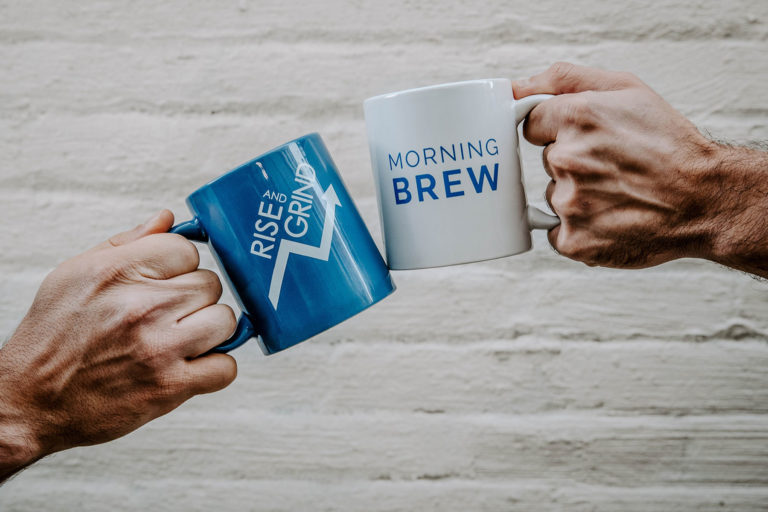